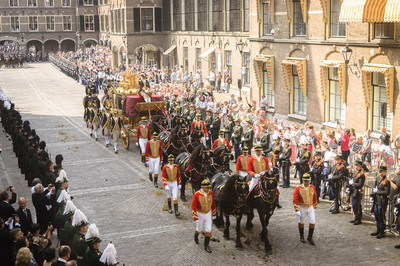 The popularity ratings of the Dutch monarchy are the envy of every president worldwide. Traditionally around 80% during the reigns of Queen Juliana (1948-1980) and Queen Beatrix (1980-2013) it has waned somewhat under the still relatively inexperienced King William Alexander to around 65% in the face of seeming improprieties by Willem Alexander and other members of the royal family during the economic crisis.

The demands made on the monarch are legion and often conflicting. He should be visible and accessible, but elevated at the same time. He needs to be popular and close to its subjects, but never ‘common’. He is always walking a fine line between being a public figure and a private individual. The king is expected to carry an appropriate measure of wealth, but must never be caught being ostentatious. Obviously, King Willem Alexander is, like his mother and grandmother, in the difficult position to define the monarchy in the ever changing social and economic landscape and take it on a course to modernity. Where this will lead is not clear and there is no manual. Kingship may be medieval, irrational in its essence, but it remains extraordinarily modern in appeal. Therein lies its vulnerability. To stay modern requires constant course-correction. Whatever the outcome of this process, one tradition will be enduring. It is Prinsjesdag (Princes Day), on the third Tuesday of September and its popularity among the Dutch public, like the monarchy itself, is unwavering.

Although some of the rituals surrounding Prinsjesdag have changed or have been modified, the essence and purpose of the ceremony remains very much the same: it is the day when the king reads the Troonrede (Speech from the Throne) that outlines government policies for the year ahead in attendance of both chambers of parliament (States-General), the cabinet and leading political figures as well as ordinary people. Prinsjesdag, however, is more than a political and economic event. It has great ceremonial significance. Prior to the Speech from the Throne a royal procession moves from Noordeinde Palace to the historic Ridderzaal (Hall of Knights) in The Hague and back again after the speech has been delivered with much pomp and circumstance. During the procession, the King and Queen wave to the thousands of people lining the streets from the Golden Coach, the traditional mode of transport that will not be seen by the public for the next three or four years as it will undergo rigorous restoration (and will be temporarily replaced by the less glamorous Glass Coach). 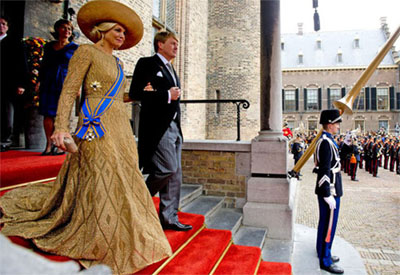 Prinsjesdag is a meticulously planned event that follows a strict script, describing each detail as the royal procession alone involves a great deal of military might. The line-up includes standard bearers, the cavalry and other honorary escorts, such as the grenadiers, national police, personal adjutants of the king as well as three additional coaches carrying dignitaries and select members of the Royal Family. Bands of all divisions of the armed services line the streets of the procession from the Noordeinde Palace via Heulstraat, Kneuterdijk, Lange Voorhout, Tournooiveld, Korte Vijverberg, to the Binnenhof, the seat of government and the location of the historic Ridderzaal. The Royal Airforce band is in attendance at Noordeinde Palace, and that of the Marines at the Ridderzaal. Both bands play the national anthem, the ‘Wilhelmus’, when the king departs, respectively arrives at the palace and the Ridderzaal. At nearby Malieveld park, the Mobile Artillery Corps takes care of the 21-gun salute from the moment the king leaves the palace.

Preparations for Prinsjesdag start months ahead of the event. The script stipulates hundreds of details, including the bands rehearsing their music, the horses being selected for the procession and that the coaches are inspected and, if necessary, repaired or adjusted. Shortly before Prinsjesdag, the many participating horses undergo a televised ‘stress-test’ on the beach of Scheveningen, where a crowd of hired rowdy youngsters make lots of noise, including setting off firecrackers. This is not a luxury, unfortunately, as incidents do from time to time happen when troubled individuals try to disrupt the festivities. So far, however, no serious harm has been done, but with the international terrorist threat mounting, security around Prinsjesdag is becoming more tight every year.

The reading of the Speech from the Throne 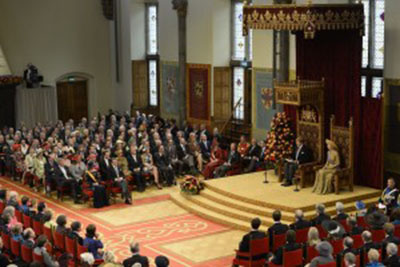 The procession departs at exactly 1pm and takes around 25 minutes to reach the Ridderzaal. Upon arrival of the king at the Ridderzaal, he and the queen descent from the Golden Coach and salute the royal banner at the entrance, while the national anthem is being played. The couple is subsequently received by the members of a special committee, whose sole task it is to accompany the king and his wife to their thrones. When doing so, the President of the States-General announces the arrival of the king by calling out the words: “The king!” whereupon all present stand up. During the one minute or so that it takes for the royals to reach their thrones, solemn music is being played (this is a relatively new addition to the tradition, introduced by Queen Beatrix). Once the king is seated, so can those in attendance. The king then reads the Speech from the Throne which traditionally begins with the words: "Members of the States-General ..." After having finished reading the speech, around 15 minutes later, the President of the United Assembly calls out: "Long live the King," which all present answer with "Hurrah! Hurrah! Hurrah!" Then the King leaves with his retinue to the adjacent Queen's Chamber for a short break and refreshments. At about 13:50 pm the procession departs from the Ridderzaal to return to the Noordeinde Palace by the same route. Once returned at the palace, at 2pm, the King and Queen proceed to the balcony of the Noordeinde Palace for the traditional ‘balcony scene’, where they are met with cheers from spectators. Taking place since the 1960s, this scene has become a trademark moment of the Dutch Royal Family. 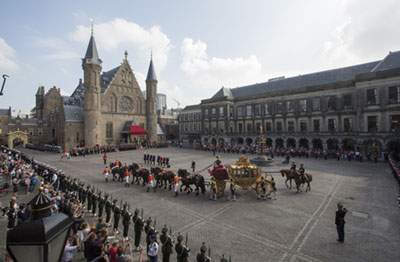 The entire procession and speech are broadcast to the nation on television complete with commentary on the various, sometimes quite grotesque hats adorning the heads of the lady guests in the Ridderzaal. Prinsjesdag is now the only lasting public ceremony in which the traditional nature of the monarchy is still on display in the Netherlands. The contents of the Speech from the Throne are supposed to be secret until Prinsjesdag but in recent years, the document has leaked beforehand and this has now almost become part of the tradition. The political meaning of Prinsjesdag and the reading of the Speech from the Throne has always been the subject of some controversy. Since the Speech from the Throne is written by the government (the cabinet), some feel that the prime minister should read it. The king, although reading the words, has no responsibility for them.

In the 18th century, Prinsjesdag was one of the country's most popular public holidays and was originally used to celebrate the birthday of Prince William V who was the last Stadtholder of the Dutch Republic. He went into exile to London in 1795. In 1813, his son, King William I returned to the Netherlands and became the first Dutch monarch from the House of Orange.
Historically, the constitution has stated that the opening of parliament should take place on a fixed date. The opening of parliament was originally held on the first Monday in November in the first half of the 19th century and then the third Monday in October, but when a constitutional revision introduced annual budgets in 1848, more time was needed to debate the budget, so the date was brought forward a month. Monday was considered inappropriate, because many parliamentarians in distant parts of the country needed to leave their homes on Sunday to make it to The Hague in time, so an 1887 revision moved Prinsjesdag to Tuesday. Throughout the years 1815 to 1904, the speech from the throne was given in the assembly room of Parliament, but was moved back to the Hall of Knights after an extensive restoration of the building at the start of the 20th century.

During the 2015 Prinsjesdag, the turnout of cheering, waving and singing “Oranjeklanten” (supporters of the House of Orange) was just as massive as in preceding years, despite the rain. Does this mean that King William Alexander is steering the right course, balancing tradition and modernity? Only the future can tell.